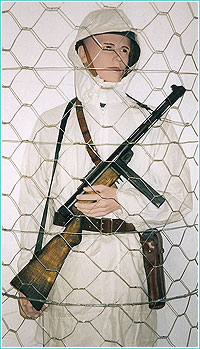 Tromsø War Museum was founded in 1993 to take care of the city's war history from early times - around 1250 - until today.

The Museum has three main parts:

A restored ex-German naval battery, equipped with two 10,5 cm cannons, searchlight, mine thrower, a subterranean command bunker has been restored and furnished with communication and optical equipment from World War II. The function of the battery was, together with four other batteries, to protect the Tromsø area from an Allied invasion.

The “Tirpitz” exhibition - a permanent exhibit of objects, text and images showing the western world´s largest and most powerful battleship (52 600 tonnes). The vessel was a major threat to Allied convoys that carried war material to the Russians through the Atlantic and Barents seas, along with other heavy surface vessels, submarines and aircraft. The battleship vas damaged by British minisubmarines in Kåfjord by Alta fjord in September 1943. It was relocated to Tromsø and sunk by British Lancaster bombers on 12 Nov. 1944 close to Håkøya, not far from the city centre. The bombing went on for 10 minutes, causing the ship to turn over. 971 of the crew lost their lives. The immens task of cutting up the vessel took seven years.

A separate room where the German retreat from the Leningrad frontier through Finland to Troms in 1944-45 is portrayed. 120 000 men spent half a year on the journey. Many of the units were taken from Tromsø to German harbours on board ships, and the need for mooring capacity until 1945 was the main reason why Tromsø was not destroyed by the Germans like the towns in Finnmark county.

The rest of the museum deals with Tromsø's defence and war history, complemented with acccounts from the frontiers where young Tromsø refugees made a contribution during the war.

Tromsø War Museum is situated at Midtre Kaldslett, 4.5 km south
of the Tromsø Bridge on the mainland, by Solstrandveien.

Bus no. 28 stops close to the museum, and there is car
parking nearby.

Open Sundays in May and September.

Open every Saturday and Sunday from June through August.